Sonakshi Sinha In An Olive Green Outfit On Instagram 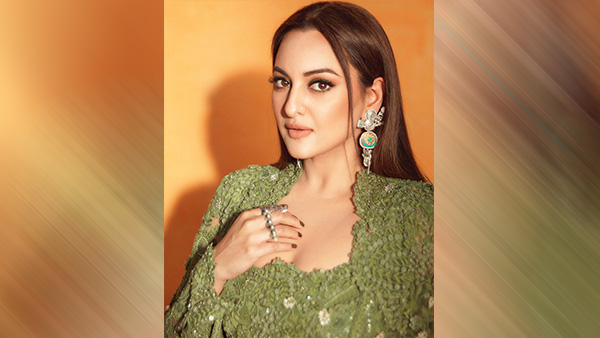 Sonakshi Sinha gave us a semi-formal outfit idea for festive and other wedding-related functions. She was styled by Mohit Rai and her jewellery game was strong too. She wore this attire for The Big Picture finale weekend and we have decoded this attire and look for you for some fashion inspiration.

So, Sonakshi wore an ensemble that was designed by Anamika Khanna. She sported an outfit that featured an embellished cropped blouse and a draped skirt. The waistbelt was intricately done and she also upped her look with a long cape that was meticulously embroidered. It was an awesome outfit and Sonakshi Sinha pulled off this ensemble of hers, gracefully. She teamed her ensemble with brown sandals, which went well with her outfit. She accessorised her look with a pair of statement turquoise jadau earrings from The Safari Edit. Her earrings came from Lara Morakhia. She also wore silver and gemstone rings, which came from Amrapali and Curio Cottage.

The makeup was highlighted by brown nail lacquer, which upped her look. The makeup was also marked by light pink lip shade, contoured cheekbones, and smokey kohl with mascara. The sleek middle-parted copper tresses completed her look. Sonakshi Sinha looked stunning as ever. So, what do you think about her attire and look? Let us know that in the comment section.

You have already subscribed

A Thursday Promotions: Yami Gautam – The Boss Lady In Black And White Outfit!